The End of the X-Men

Issue 46 promises us a lot of satisfaction, as it delivers not only the supposed end of the X-Men, but the return of the Juggernaut. The team will have to face their most ferocious opponent without the aid of the Professor. Without Charles, they may have never defeated Cain Marko during their first encounter. How will they survive now? And is the team really finished? Can they somehow continue without Charles? (SPOILER: Yes, they can, but that happens much later.)

END_OF_DOCUMENT_TOKEN_TO_BE_REPLACED

Into the Crimson Cosmos! 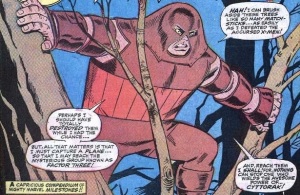 Issue 33 picks up with Juggernaut trampling through a forest, on his way to an airbase. He is trying to steal a flight to Europe, so that he can meet up with his new friends, the mysterious Factor Three. Another Marvel hero makes his first X-Men appearance, and we learn more about the mysterious Cyttorak demon.

END_OF_DOCUMENT_TOKEN_TO_BE_REPLACED

Revenge of the Juggernaut

We finally see what’s behind that old door and holy crap it’s the Juggernaut! Nice! He looks unconscious, he’s chained up, and he must have been in there for months. I can only imagine how pissed he’s going to be when he wakes up. It’s a good thing the Professor decided to go mess with him while the X-Men are away on vacation. Issue 32 begins a two part Juggernaut story, and one I’m excited to read.

END_OF_DOCUMENT_TOKEN_TO_BE_REPLACED 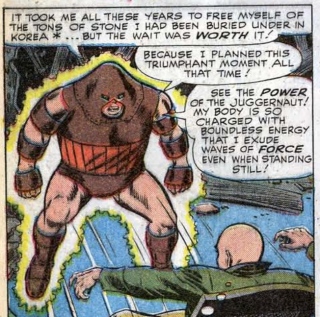 Issue 12 was basically Juggernaut’s origin story being told while he breaks into the mansion. We don’t actually see the Juggernaut other than the cover and a silhouette of him approaching at the end. All of that was setting up the first epic battle between this classic super-villain and our faithful X-Men. Issue 13 is a total brawl, just one long fight with Juggernaut.

END_OF_DOCUMENT_TOKEN_TO_BE_REPLACED

Who is Cain Marko?

Up until this point, nearly every issue of X-Men has promised that the next issue’s villain would be more menacing and more terrifying than anything we’ve seen yet. So far this hasn’t happened. It’s not that X-Men doesn’t have a ton of great villains, it’s just so hard to top Magneto. He was introduced in the first issue and I have yet to see a villain that can live up to him. Unus, Vanisher, and Lucifer left a little to be desired. Blob and the Brotherhood were very entertaining, but they’re no Magneto.

Finally issue 12 is making good on that promise. The X-Men are going to face their biggest challenge yet. The Juggernaut. This is easily their most dangerous battle so far, but first, who is Cain Marko?

END_OF_DOCUMENT_TOKEN_TO_BE_REPLACED

What’s the Deal with Juggernaut?

In the early 2000s, when I started picking up comics on a regular basis again after several years of indifference, Juggernaut was a member of the X-Men. Well, he never really becomes an official member of either team, but when he inquires about it, Havoc pretty much says, “You got it, bro.” He’s also living at the Xavier Institute and sleeping with She Hulk, which is fairly hysterical. But, he’s not a mutant, so should he really be on one of the X-teams? If he’s not a mutant, why does he set off cerebro? What’s the deal with his crimson armbands? And did I just see Colossus wearing his helmet during AvX.
END_OF_DOCUMENT_TOKEN_TO_BE_REPLACED