Strangers in a Savage Land

Sauron might not have been from the Savage Land, but his origin is still forever tied to it. As the X-Men search for his body, they discover a passage into this legendary realm, a primitive jungle world hidden beneath Earth’s southern pole. They have an adventure with Ka-Zar and Zabu! The X-Men find themselves knocked down a few pegs on the food chain, faced with dinosaurs, monsters, and a classic villain. Issues 62 and 63 are full of surprises and danger.

END_OF_DOCUMENT_TOKEN_TO_BE_REPLACED 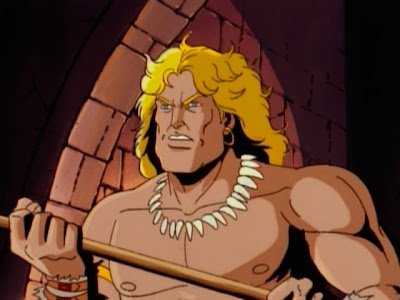 Remember Ka-Zar? Of course not. Well just remember that he’s Tarzan and he’s from the Savage Land. I was recently watching the 1992 X-Men cartoon and guess who showed up.
END_OF_DOCUMENT_TOKEN_TO_BE_REPLACED

Ed already talked about Ka-Zar so I’m not gonna go too overboard, but there were a few things about this encounter that I wanted to mention. I know that I’ve said some disparaging things about a lot the villains that we’ve met so far, and I don’t want to come off as overly critical. I realize that this was fifty years ago, and I know that they’re not gonna be fighting the Juggernaut or Apocalypse every single issue, and I do realize that some of the supporting characters aren’t gonna be like, the very best. That being said however, in issue #10 we are again treated to 30 pages concerning a babbling naked man. On the very first page, I was promised that Ka-Zar would be ‘unquestionably the most spectacular new character of the year’. Well, this book must have come out during some weird time anomaly that caused an entire year to go by during the month this was on stands, because nobody likes Ka-Zar.

END_OF_DOCUMENT_TOKEN_TO_BE_REPLACED

Journey to the Savage Land

Ka-Zar sucks. I want to say that right from the start. He’s basically Marvel’s Tarzan. If this issue was just about the X-Men running into Tarzan, sorry… Ka-Zar, I wouldn’t even bother mentioning it. What’s far more significant about this issue is that this is the team’s first visit to the Savage Land.